Diary of a Starseed PT: 2 The…

The Art of Butterfly Gardening: How to…

Simple Living in the 21st Century

Why Goats are the Ultimate Pack Animal BUCKSHOT PIE: A Family’s Struggle Through Homesteading, The Great Depression, and WW II

Buckshot pie is a metaphor for pioneer spirit, tough times, and the bitter-sweet struggle to survive and live off the land. Pearl’s wild elderberry pie was jokingly referred to as buckshot pie by her five sons. They followed the winding banks of Rock Creek near Winona and then Pine Creek near Oakesdale and they rode…; 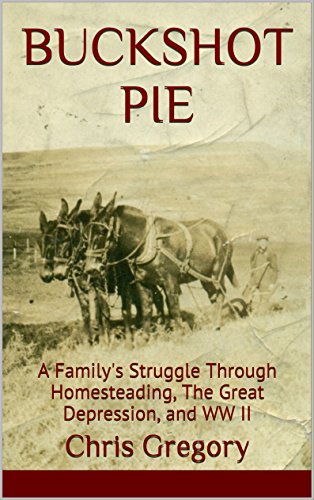 Buckshot pie is a metaphor for pioneer spirit, tough times, and the bitter-sweet struggle to survive and live off the land. Pearl’s wild elderberry pie was jokingly referred to as buckshot pie by her five sons. They followed the winding banks of Rock Creek near Winona and then Pine Creek near Oakesdale and they rode the countryside on horseback to pick the fruit for their mother because they loved her lattice-crust berry pies. However, they ate them carefully to avoid the occasional hard seed.

Buckshot Pie chronicles the struggles of this family to provide for a living on marginal wheat farm land. It follows the early deaths and the loss of the homestead through bank foreclosure. It continues through the Great Depression and the difficult economic times as Pearl tried, but failed to retain the mortgage on her beloved Corner Café. But the most difficult times for the family were experienced in World War II. The eldest brother fought through the Battle of Bataan and survived the Bataan Death March. He survived 30 more months under torturous conditions at the hands of sadistic Imperial militarists. After suffering recurring bouts of malaria, beriberi, dysentery, as well as, beatings, and starvation he lost his battle aboard the Hokusen Maru, one of the Japanese hellships. Two other brothers were in numerous combat flights and both narrowly survived crash landings. The youngest brother, badly wounded by a German grenade, recovered, but lost sight in one eye while a prisoner of the Nazis for over 13 months. The grief and anguish took its toll on Pearl with cause for broken heart throughout most of her life, and culminated in failing health and death from cancer at age 52. The surviving boys and their sister went on to marry, raise families, and continue the struggle with success, but always remembered their humble beginnings… and their mother’s buckshot pie….

These eleven chapters are book-ended by a prologue and epilogue that start and finish with the placement of a gravestone on the unmarked grave of the first born of the homestead family. The vigil to the cemetery leads into the discussion of the family’s origins on the Whitman County homestead, north of Winona in the channeled scabland area of Texas Draw. The story finishes with the placement of the stone on little Neva’s resting place almost a century after her birth and short fragile life, and 97 years after her heart wrenching death… .

Growing into a Farm: Before the Walden Effect (Modern Simplicity Book 4)

Reap, Sow, Grow: I reap what I sow and grow in the process.

The New American Homestead: Sustainable, Self-Sufficient Living in the Country or in the City