See the 2022 kids
Your goat comes with a BONUS Mentoring Package:

Spending too much on grain and other inputs?

New to goats and feeling confused about how and where to get started?

Having trouble with parasite resistance or recovery (resilience)?

Goats dancing on your cars, climbing fences, or yelling loudly enough to wake the dead?

Looking for a multipurpose family homestead goat that can produce meat, milk and possibly fiber?  Or a rare easy-to-manage dairy goat?

We have your goat solution!

Email info@barakah.farm or phone/text 717.579.4242 for more information about our goats.

Meet our rare heritage goats and learn how we manage our goats.  View our currently available kids, and meet the parents.

Our goats are happy to make a zoom appearance at your family gathering or work meeting.  Many goats to choose from.

Get behind-the-scenes access, including night cameras, as well as tour admission (online or at the farm), naming votes, and other fun perks.  Starts at only $1

Our goats are low input, thriving on browse and hay and a quality Dynamite mineral buffet only. Our goats are quiet, and adults rarely climb.  Our fainting goats are registered with the Myotonic Goat Registry, adding value to your investment with the potential for registered kid sales.  We offer mentoring to our buyers, both before the sale and after.

With our farm focus being heritage breeds, we chose to work with Myotonic Goats and now are adding Golden Guernseys.  We chose both of these goat breeds for their low-input diet, parasite resistance, quiet calm temperament, and lack of tap dancing on cars.

After a break during the move to Barakah Heritage Farm followed by a tragic barn fire, Oak Hill has returned to breeding.  We are rebuilding our herd, so we cannot currently claim to have multiple generations of low input chemical-free gmo-free goats.  Our fainting goats are registered with the Myotonic Goat Registry.  We keep our goats healthy with a quality mineral buffet from Dynamite.  You can view our previous fainting  from 2008 to 2021 here.

About Fainting Goats or Myotonic Goats…

The breed, according to Dr Phillip Sponenberg, DVM, PhD & Barbara Roberts, is described rather than standardized.

A breed description is different from most breed standards in that a description describes, while a standard prescribes.  The Myotonic goat, a landrace breed, is more varied than standardized goat breeds – especially so if it is compared to imported breeds that were started with relatively few goats that all had very similar traits.  A landrace type of population means that the Myotonic goat breed survived (and many still do) as an untracked and unmonitored population of locally used goats for local production purposes.  Imported and standardized breeds in the US include nearly all the Dairy breeds along with the Angora and Boer goat. This breed description is lengthy, and tries to be very specific so that breeders can understand just exactly what a Myotonic goat is, and why the breed is more than the single trait of myotonia.

The Myotonic goat is a distinct breed yet it has many synonyms for names, including Nervous Goats, Wooden-Leg Goats, Scare Goats, Fainting Goats, and Tennessee Fainting Goats. The breed is a multi-purpose goat derived from a variety of strains of goats that were originally from Tennessee. As is typical of locally developed breeds, the overall type and conformation do vary somewhat more than is typical of imported, standardized breeds (dairy breeds, Angoras, Boers). However, the breed does have several distinctive features that set them apart from other goat breeds, and it is these features that help to define the Myotonic goat as a breed. Several old strains of Myotonic goats persisted in Tennessee, and goats of these lines can still be found. In addition, several lines developed in Texas since the 1950s, and some of these have a slightly different “look” by virtue of being selected in a different environment and for different goals. One must remember that the Texas goats ultimately originated in Tennessee and so both strains are indeed branches of the same breed.  The relatively newer strain of the breed is the minis.  The mini Myotonic goats retain the distinctive breed features, though in a more compact and shorter size.  They too ultimately originated in Tennessee, just as the Texas strain, and so too are a branch of the same Myotonic breed.

Myotonic goats have a very distinctive breed type that is based mostly on head and body conformation. They also have a muscle condition called myotonia congenita. This inherited trait leads to an overall increase in muscle mass so that the goats are very muscular when compared to other breeds of similar size. This trait is so distinctive that it is easy to confuse the trait with the breed. However, the Myotonic goat is much more than just a myotonic condition; it has a host of other consistent traits that are very important and need to be conserved for future generations. 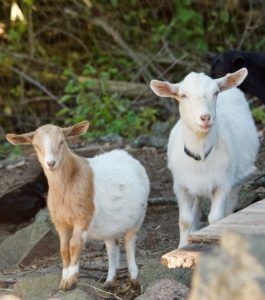 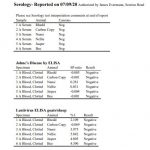 The Golden Guernsey is a rare breed of dairy goat from Guernsey in the Channel Islands, where it has been known for more than two hundred years.

Golden-colored goats have been known in Guernsey for some two hundred years.  The first documented reference is in a guide book published in 1826. In the nineteenth century these goats were known as “Golden Gessenay”, Gessenay being the French name for the Swiss Saanen breed.

During the Second World War when Guernsey was occupied, Miriam Milbourne risked her life to save a small herd of Golden Guernsey goats by hiding them for several years.

As its name suggests, the goat is golden in color, with hues ranging from pale blond to deep bronze. They are smaller and more fine-boned than other British milking goats, and there is great variety in coat length. The males are usually horned, with very splendid horns, very few do not have horns.  Their personalities have been described as “very docile, very friendly”.

The goat is efficient milking livestock for its relatively small size, producing an average yield of 3.16 kilograms of milk per day; this is less than most Swiss goats, but the milk has high butterfat and protein content (3.72% and 2.81%, respectively).

No need to maintain a stinky buck in separate housing.  If you keep a closed and tested herd (ask us how) you may bring your doeling back annually to be bred to a buck of your choice.

Contact us today to reserve your doeling and secure free breedings