TETOUAN, Morocco – The uphill footpath of recycled tires and timber logs winds between fig, olive, and pomegranate trees, passing cactus bushes and a scattered assortment of flowers and herbs. The garden does not appear to reflect years of thoughtful planning and work, but everything here was planted with a purpose.

“Every single piece of soil here has its own story,” says Farida Alluch, a certified permaculture designer, about her home garden in Tetouan, in northern Morocco. 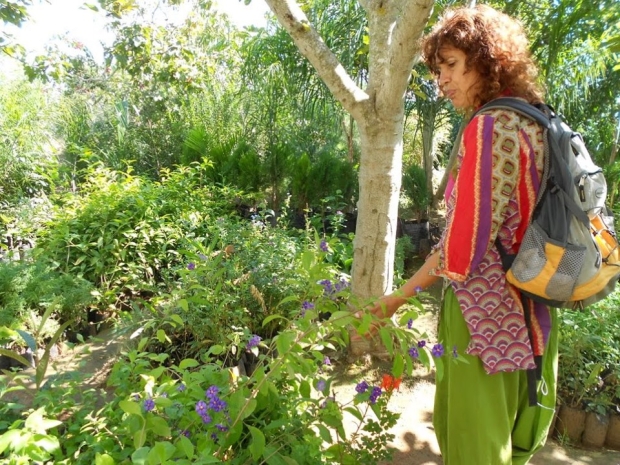 “Here you clean the dishes with pleasure knowing that you are watering the plants,” says Farida Alluch, a certified permaculture designer (MEE/Matthew Greene)

Alluch is among a growing movement of gardeners and farmers in Morocco’s Rif region practising permaculture – an approach to agriculture that encourages working with, rather than against nature where the emphasis is on sustainability.

Developed in the 1970s by Australian biologists Bill Mollison and David Holmgren, permaculture’s popularity is increasing in drought-prone Morocco.

The north African country is currently in the midst of a water crisis due to high consumption rates and inadequate management of the resource. According to the World Resources Institute, Morocco is among the countries expected to face “extremely high” levels of water stress by 2040.

Unpredictable weather in recent winters is also contributing to Morocco’s current drought. This past November was the driest month of the country’s winter rainy season in more than 20 years.

Though her background is in sociology, Alluch says that she “has always been interested in ‘greening’ the desert,” beginning with a career in project development at the World Bank that posted her to Eritrea, Yemen, and throughout Latin America, exposing her to questions about climate change and ecological challenges.

It was in Eritrea where Alluch first encountered permaculture, but when it came to pursuing the activity more seriously, she returned to her native Tetouan, spending close to two years surveying land for sale before settling on her current location. 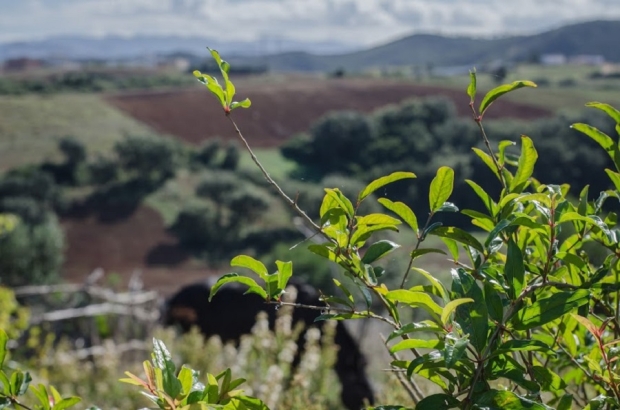 The property back then was “just some bushes and shrubs,” she says on a tour of her front yard garden.

Alluch designed a small ranch-style home, which she built along with the help of neighbours and friends. Implementing mostly natural supplies collected from the local area, dried mud bricks were used for walls and bamboo reeds for roofing. The materials keep the space cool in the summer months and sustain heat when temperatures begin to drop.

Additionally, on her own she installed a plumbing system that directs water drainage to irrigate sections of the garden.

The produce vendors and distributors want to have perfect-looking produce. They will not accept defects

“Here you clean the dishes with pleasure knowing that you are watering the plants,” Alluch says with laughter.

Arriving at this point, however, was a process of trial and error despite Alluch obtaining a permaculture design certificate in Argentina. The first plant she put in the ground was a banana tree that died after several months.

“It was a blunder. I tried to bring something to the land instead of inviting what wants to come. I looked at what my neighbours were growing, and that is when I started to see results,” she says.

Experimentation continues to inform how Alluch approaches gardening. She is particularly attracted to plants with features adapted for arid climates like her recently acquired moringa. The plant is endemic to India and is both drought-resistant and naturally produces nitrogen to enrich the earth. 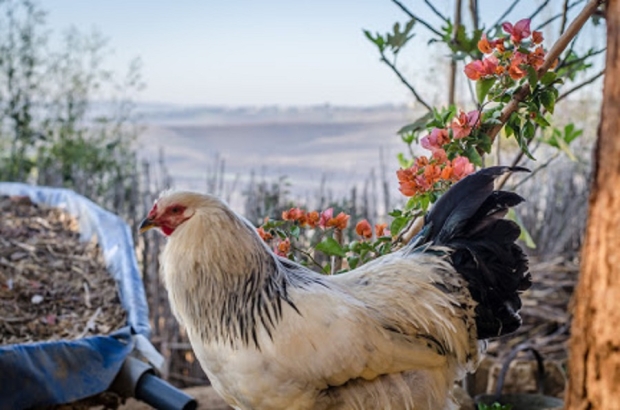 Alluch avoids synthetic products such as fertilisers and pesticides, a position shared among many permaculture practitioners. Instead, she favours using natural or “green” mixes to feed her plants, which typically consist of straw and compost.

When she explains this to her farming neighbours, they agree with her in principle, but admit that the pressures of Morocco’s agricultural industry make it difficult to justify doing the same.

Many of his neighbours earn a living from cannabis farming

“Unfortunately, the market dictates how farmers work. The produce vendors and distributors want to have perfect-looking produce. They will not accept defects,” claims Alluch.

Still, community members share an interest in learning common permaculture techniques like composting or how to arrange plants together for better efficiency. 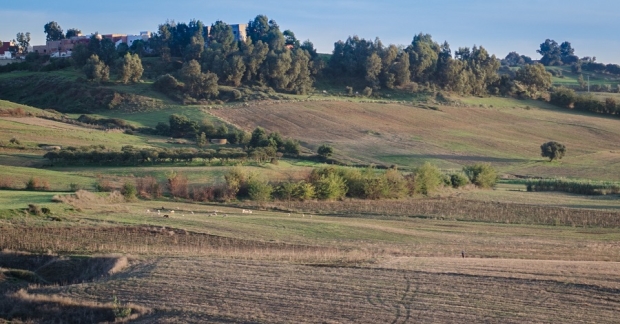 Morocco is nearly a decade into a national agricultural reform programme designed to maximise food production and promote exports. The Ministry of Agriculture claims the programme will improve efficiency, but there are concerns that the reform is pushing a model of intensive farming at the urging of international development organisations and big agribusiness.

The programme, Plan Maroc Vert, is backed by groups including the African Development Bank, the Food and Agricultural Organisation of the United Nations (FAO), the World Bank and fertiliser corporations like Maroc Samad.

Part of the programme is to increase the scale of farming, mechanise agriculture, improve infrastructure (i.e. irrigation systems), use more fertiliser and make it easier for banks to finance and invest in agriculture.

The country is the primary North African supplier of fruits and vegetables to the European Union (EU), sending approximately 60 percent of its agricultural exports to the EU, with demand expected to further increase in the coming years.

In the province of Chefchaouen, 65 kilometres south of Tetouan, organic farmer Ahmed Ayad has watched the impact of intensive farming unfold around him.

With many of his neighbours earning a living from cannabis farming, they depend on fertilisers and other chemicals to meet their target yields. Applying the products, however, uses up significant quantities of the area’s water supply, in addition to stripping the soil from much of its value.

Morocco is the world’s leading producer of cannabis and the primary supplier of the drug for Europe’s illicit cannabis market. While the government has managed to eradicate some cultivation – which remains legal in areas of the Rif – the industry is poorly regulated and continues to provide a livelihood for approximately one million Moroccans. 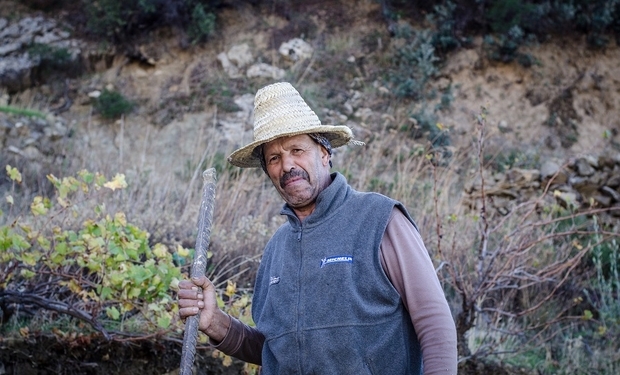 From a seat at his coffee table beneath an acorn tree, Ayad points out the half empty water basin that sits in the bottom of the mountain valley. The harvest season is over, but rains have yet to arrive to replenish the dam.

The farming he does today is not lucrative for him and he is more or less retired. He pursues his farming more out of passion than as a business endeavour. According to Ayad, he went organic when he started observing irregular weather, rising temperatures and less water.

Now in his late fifties, Ayad says the consequences of the drought are evident.

“There is less water in this area than before to the point where even the animals are fewer,” he says.

To cope with the dry conditions, Ayad turns to composting for soil enrichment. He rotates his gardens to prevent soil depletion, and has even created the area’s first wind-powered sprinkler as an improvised irrigation system.

The techniques have helped Ayad nearly achieve food self-sufficiency, but he does not sell any produce.

He dries and stores beans, fruits and vegetables plucked from his garden to use across the winter months. It is a feat he is keen to remind visitors of when coming to his home that is also an “ecological inn“. Complete with an ad on Airbnb, Ayad’s son Ibrahim manages the bookings.

“Everything is from the garden,” he says proudly over a bowl of vegetable stew prepared earlier in the day.

Ayad’s lifestyle – he does not use electricity – earned him the nickname of “El Bio” in the village and a reputation among neighbours for gardening “the way it should be done”.

Some devices such as his radio run off a battery, while he uses a gas burner for lighting in the evening. Items such as his mobile phone are kept alive with a solar charger.

Like Ayad, Alluch has also stirred up talk in her small neighbourhood once people took notice of what she was doing.

“They would ask questions like ‘Why is she buying straw? She does not have any cows,” says the smiling Alluch. “I am a bit of a phenomenon around here.”

Alluch welcomes all guests who inquire about her garden. She likes to use the interest as an opportunity to show visitors that permaculture promotes a mindful lifestyle, not a less modern one.

“All I want to do is exploit their curiosity. My door is open to anyone who wants to come in and see what is happening here,” she says.

Alluch also hopes that she can introduce younger people to permaculture, like her 32-year-old neighbour Ali Fares, a farmer she is now persuading to take permaculture design courses. Courses are offered in the Morroccan cities of Essaouira and Marrakesh.

“I slowly became interested in everything. I wanted more information. I would walk into the forest and begin asking myself these questions about the relationship between this and that. You open your eyes to what is going on around you,” Fares says.

Though Alluch teaches permaculture concepts informally, she has ambitions to integrate a more structured educational component to her project in the near future, especially as she notices more urban professionals becoming worried about climate and food security issues.

For Linsey Taylor-Auad, the founder of Assilah Eco Village, the concepts of conservation and sustainability are not radical ideas to many of her neighbours in Sidi El Yamani, a village near Morocco’s northwest Atlantic coastline. 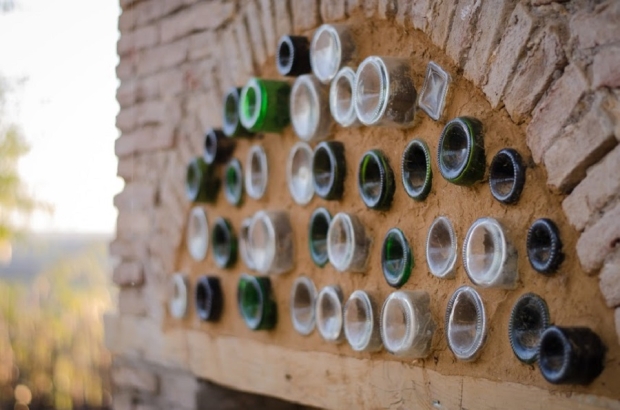 The village, founded in 2014 and funded out of Taylor-Auad’s own pocket, is inspired by traditional English country-style architecture and has unique aspects, such as a guest cabin built from recycled cable reels.

“From my experience, people from rural areas are incredibly resourceful. They are skilled in mending and repairing just about everything from clothing to electronics,” Taylor-Auad says.

Taylor-Auad would like to eventually invite local artisans to her site for collaborations that teach volunteers and tourists traditional crafts like weaving, as well as offer workshops in building all-natural homes, solar water heating and other eco-construction skills.

Down the road, Taylor-Auad’s neighbours Ismael Jimenez and Nina Wagner say they need all the help they can receive as they convert land inherited from Jimenez’s family into a permaculture farm and guesthouse.

The pair, who began their project three years ago, are benefiting from the input and guidance of local labourers.

“We discover many possibilities by comparing and combining our style with their approach,” says Wagner.

Having learned mostly from reading permaculture books and online tutorials, Jimenez and Wagner find much-needed encouragement from the local interest and assistance they receive. Ideally, they would like to see their project inspire others to do the same.

“Really, anyone can do permaculture,” Jimenez believes.

The Seed Garden: The Art and Practice of Seed Saving

Finding your homesteading peeps (and a giveaway) – The Thrifty Homesteader