Blessed Are the Weird: A Manifesto for Creatives

The world wants its soul back…This book is for highly sensitive people who have felt out of place in the modern world. It provides a narrative that describes how they fit into a lineage of creatives throughout history, and how their gifts are needed during this precise era of “new renaissance” on Earth.In this book,…; 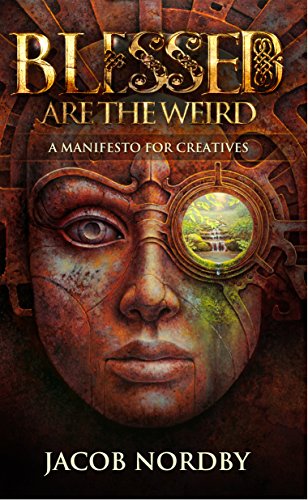 The world wants its soul back…

This book is for highly sensitive people who have felt out of place in the modern world. It provides a narrative that describes how they fit into a lineage of creatives throughout history, and how their gifts are needed during this precise era of “new renaissance” on Earth.

In this book, award winning author Jacob Nordby offers a bold new definition of success in the modern era.

“The only success now is living and creating a work-of-art life: unique, rich with meaning, naked of anything we don’t care about, and ruthless about carving out something absolutely real from a world that has gorged itself on fakeness and become critically ill from it. The only failure now is pulling back from that quest because of fear.”

Expanding upon his short original “Blessed Are the Weird” piece that became a viral phenomenon, he traces the roots of soulful artistry and creation to ancient times and back again to reveal the insistent, eternal quest of our true natures that demands something real—as if our very existence depends upon it.

This book is a call to creatives (and those who want to be) with the clear message that it has never been more critical to heed the call of soul than it is during this exciting, dangerous new renaissance epoch on Planet Earth.

Heartfelt and sometimes humorous, it lights a signal fire for all who feel out of place in the modern world and invites them to claim their heritage as members in an ancient lineage—those tenders of soul and beauty who have always kept the flame alive for humanity.

This is a book for everyone who wants to lead a deep, true, and passionate life and leave the world better for having passed this way.

Blessed Are the Weird. Your time has come to define the new normal.

In addition to dealing with the issues of personal motivation and overcoming creative blocks, the author develops ideas related to permaculture, social artistry, and the evolution of ethics. This book is rich with quotations by poets, philosophers, artists, thinkers, and creatives including

This book is written for all personality types, but those who test on the Myers-Briggs (MBTI) as INFJ, INFP, ENFJ, or ENFP will likely gain inspiration and insight into their unique struggles, design, and life purpose.

While vastly different in style from Elizabeth Gilbert’s recent bestseller, Big Magic, and Brene’ Brown’s books, it contains themes that will be familiar to fans of these leading voices in the creativity and vulnerability arenas.

Ultimately, this book is for everyone who feels the urgency of our age and the call to make potential real. The author feels that broad based anxiety permeates modern culture and a lack of purpose and direction gives rise to such social ills as increased rates of terrorism, suicide, and other acts of chaos. He tells us that the cure lies in the fact that each of us can connect with our inner genius, overcome inertia, and create “work of art” lives that will make the world a better place while enriching our individual experience. He says that this is both personal and not optional, and that we have been handed the opportunity to make a huge collective leap forward unlike anything that humans have known before.

Fungi Are the Missing Permaculture Function

When The Grid Goes Down: Disaster Preparations and Survival Gear For Making Your Home Self-Reliant