Simple Living in the 21st Century

Why Goats are the Ultimate Pack Animal The earth is in great peril, due to the corporatization of agriculture, the rising climate crisis, and the ever-increasing levels of global poverty, starvation, and desertification on a massive scale. This present condition of global trauma is not “natural,” but a result of humanity’s destructive actions. And, according to Masanobu Fukuoka, it is reversible. We…; 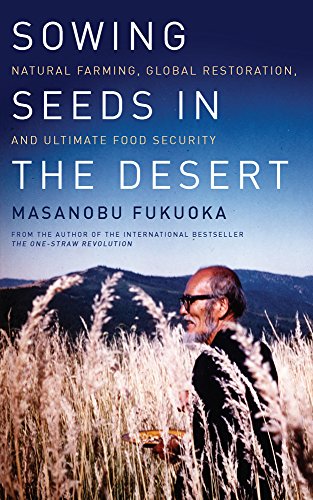 The earth is in great peril, due to the corporatization of agriculture, the rising climate crisis, and the ever-increasing levels of global poverty, starvation, and desertification on a massive scale. This present condition of global trauma is not “natural,” but a result of humanity’s destructive actions. And, according to Masanobu Fukuoka, it is reversible. We need to change not only our methods of earth stewardship, but also the very way we think about the relationship between human beings and nature.

Fukuoka grew up on a farm on the island of Shikoku in Japan. As a young man he worked as a customs inspector for plants going into and out of the country. This was in the 1930s when science seemed poised to create a new world of abundance and leisure, when people fully believed they could improve upon nature by applying scientific methods and thereby reap untold rewards. While working there, Fukuoka had an insight that changed his life forever. He returned to his home village and applied this insight to developing a revolutionary new way of farming that he believed would be of great benefit to society. This method, which he called “natural farming,” involved working with, not in opposition to, nature.

Fukuoka’s inspiring and internationally best-selling book, The One-Straw Revolution was first published in English in 1978. In this book, Fukuoka described his philosophy of natural farming and why he came to farm the way he did. One-Straw was a huge success in the West, and spoke directly to the growing movement of organic farmers and activists seeking a new way of life. For years after its publication, Fukuoka traveled around the world spreading his teachings and developing a devoted following of farmers seeking to get closer to the truth of nature.

Sowing Seeds in the Desert, a summation of those years of travel and research, is Fukuoka’s last major work-and perhaps his most important. Fukuoka spent years working with people and organizations in Africa, India, Southeast Asia, Europe, and the United States, to prove that you could, indeed, grow food and regenerate forests with very little irrigation in the most desolate of places. Only by greening the desert, he said, would the world ever achieve true food security.

This revolutionary book presents Fukuoka’s plan to rehabilitate the deserts of the world using natural farming, including practical solutions for feeding a growing human population, rehabilitating damaged landscapes, reversing the spread of desertification, and providing a deep understanding of the relationship between human beings and nature. Fukuoka’s message comes right at the time when people around the world seem to have lost their frame of reference, and offers us a way forward.

The Illustrated Encyclopedia of Country Living

Homesteading: A Backyard Guide to Growing Your Own Food, Canning, Keeping Chickens, Generating Your Own Energy, Crafting, Herbal Medicine, and More (Back to Basics Guides)