Masanobu Fukuoka, the late Japanese farmer, developed a unique farming system he called “Natural Farming.” Trying to replicate what he saw in Nature, Fukuoka´s no till system allowed the soil to continually grow in fertility. Through the use of mulch and cover crops, this system effectively allows for continuous harvests of crop rotations, eliminates weeds and builds healthy top soil allowing for organic food production that is ecologically sustainable.

Problems With Till Agriculture

Farmers have been tilling the soil for 10,000 years. It is what exemplifies the occupation of those who make their living from the land. Tilling the soil allowed humanity to produce higher concentrations of food in one place giving rise to the denser populations of city centers and eventually the development of modern civilization as we know it. However, tilling the soil also brought with it a whole host of undesirable effects, including erosion and the loss of the microbial life of the soil. Some studies have linked the fall of major civilizations such as the Mayans of Mesoamerica to the over farming of the land which eventually led to a decreasing soil capacity.

By tilling the soil year after year, the microscopic life of billions of creatures in the top three inches of the soil is essentially killed off. What’s left over is a barren, lifeless medium incapable of offering the nutrients plants need to grow and offer us their fruit. Furthermore, the more we till the soil, the more we leave the precious humus that is the life-sustaining “skin” of our planet vulnerable to the elements of wind and rain. The erosion of top soil caused by tilling and the “baring” of the soil has led to soil compaction, loss of fertility, poor drainage, and problems with plant reproduction.

Modern, industrial agriculture has gotten around this problem of the increasing lifelessness and barren infertility of the soil through the intensive use of petroleum based fertilizers. As we reach peak oil, however, our continued dependence on petroleum to grow our food is a less-than-optimum solution. How can we grow food to sustain our growing civilization while not obliterating the fertility of the soil?

Masanobu Fukuoka was a Japanese rice farmer originally trained as a plant geneticist. After growing skeptical of the industrialization of agriculture, he returned to his family farm in rural Japan and began developing a form of “natural” agriculture where he intended to replicate the natural processes he observed around him. Fukuoka observed that in Nature, land is rarely ever overturned or tilled. With the exception of a wind storm uprooting a tree, Nature usually makes sure to completely cover soil with some sort of vegetation.

That cover of living organic material prevents erosion and allows for the continued accumulation of organic matter which eventually builds topsoil. Fukuoka´s natural farming rotated a continuous cultivation of rice and barley. He sewed the rice seed directly into the standing barley crop with the use of clay seed balls, harvested the barley, and left the straw on the field. The barley straw acted as a protective covering for the rice as it grew. Once the barley straw decomposed, it added to the organic matter of the soil. The same process was repeated once it was time for the rice harvest. 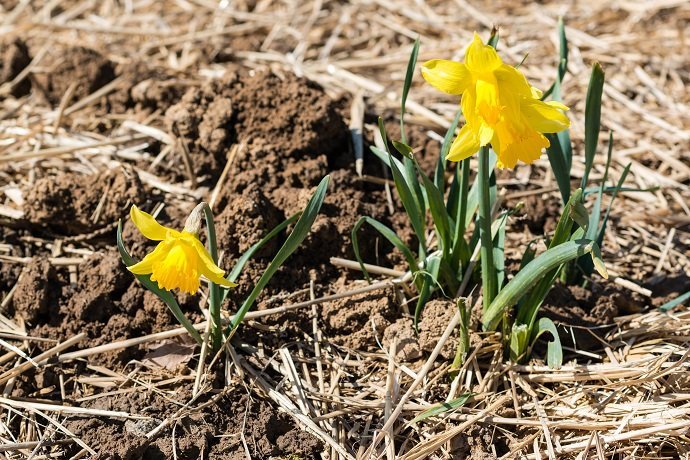 Fukuoka´s system allowed for continuous cultivation of the same piece of land over an extended period of time. Since the soil was never tilled and the rice and barley straw were continuously returned to the soil, the organic matter of the soil increased year after year adding to the overall fertility of the soil and an impressive increase in crop yields.

The main benefit of no-till agriculture is in the constant increase of organic matter in the soil. Imagine a deciduous forest where the constant leaf fall year after year slowly creates a rich layer of top soil as far as you can reach with your arm. No-till agriculture essentially emulates this natural process by replacing leaf fall with the straw and organic matter from crop cycles.

By avoiding all tillage of the soil, the organic matter from the crops you grow provides a “cushion” for the succeeding crop and continues to add to the organic matter of the soil. This continued process of decomposition of organic matter adds to the biological activity and the carbon cycling process that keeps soil alive. Not only do these soils capture more carbon from the environment (thus helping to slow down the global warming phenomenon our industrial civilization has created), they also help grow better crops.

The healthier the soil, the more nutrients your food will contain. Whereas many soils cultivated on depleted soils with the “aid” of chemical fertilizers will offer a nutrient-deficient food, healthy soils will add a whole host of micronutrients to the food stuffs we cultivate. A recent study by the FAO finds that healthy soil is the only way to produce foods with the maximum amount of nutrients and that no-tillage practices are the best way to achieve that goal.

Salamander Springs Farm: A Modern Day Example of No Till Agriculture

Susana Lein is a small farmer from rural Kentucky who has implemented one of the most impressive, small scale, no-till agriculture systems in the United States. Her farm, Salamander Springs, produces an abundance of grains, legumes, vegetables, and fruits all using a no-till system.
Lein is able to produce beans and grain using a completely no till system. Over the years, her top soil, which was originally shale clay, has grown in depth and fertility. When she does a soil test with a local laboratory, the lab classifies her soil as compost, though the process of building that soil has taken years. Susana has also been able to out-compete traditional yields of beans and grains through her completely no-till system.

No till agriculture might seem to be a contradictory idea to many people. We have been taught from an early age that farmers are made to till the earth. As our population continues to grow and as our impact on the land that sustains us continues to intensify, it might be time to reconsider those ideas. By creating new ways to till the land that don’t depend on moving the soil every year not only can we begin the process of rebuilding the life and fertility of the soil, but we will also benefit from healthier food and healthier ecosystems.

How to BUY Homesteading Honey Bees for Beehives | The Homestead Survival