The Vegan Book of Permaculture: Recipes for…

For thousands of years, farmers have generally differentiated forestry and agriculture. Forests were either left alone or planted and maintained as a source of fuel and building material. In the best of cases, certain trees also offered forage for livestock and other farm animals. The farm fields were generally kept clear of any trees because farming was relegated to nothing more than the planting and harvesting of annual (mostly grain) crops.

The only trees acceptable to farming were fruit bearing trees, and these were usually planted on areas of the farm where the terrain was too steep or otherwise unfit for the tillage needed for annual grain crops. With the ever more obvious problems related to the annual tillage of the soil and annual agriculture in general, many people have begun to consider the possibility of growing trees as crops.

The Beginnings of Forest Agriculture

The idea of growing trees as crops is not a new one. Indigenous cultures around the world have been growing and managing diversified, edible forest ecosystems (food forests, in permaculture jargon) for thousands of years. From the multi-story tropical food forests of Mesoamerica to growing evidence that large swaths of the Amazon Jungle were actually human-controlled environments, indigenous peoples around the world have long understood the benefits of tree crops and perennial agriculture systems.

From the western perspective, however, it was J. Russell Smith in the 1920´s who first began considering the idea of trees as crops. Smith´s seminal work was published under the title of “Tree Crops: A Permanent Agriculture” in 1929. In this book, he looked at several farming cultures around the world that, instead of relying on the annual tillage of the soil for grain crops, actually depended on carefully managed forest ecosystems that provided an abundance of edible foodstuffs.

The Case of the Chestnut Forests

While Smith offered several examples of potential tree crops, the most influential example was the Chestnut Forests of northern Italy. These forests, both naturally occurring and human managed, offered enormous amounts of protein and carbohydrates from the chestnuts themselves. Additionally, these forests provided a “pasture” for the pigs that were raised by local farmers.

Instead of cutting down the forest to plant grass pastures for cattle or other livestock, the farmers of northern Italy were able to raise delectable pork meat from Chestnut. This not only preserved the forest ecosystem itself but also allowed the farmers to raise premium, healthy meats to contribute to their overall diet. 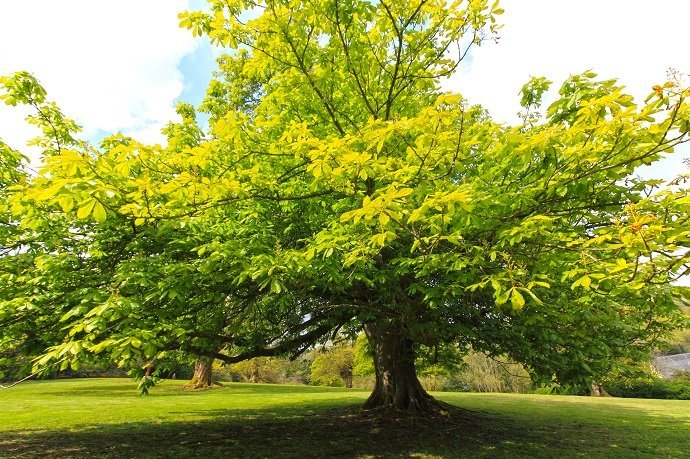 Nuts Instead of Grains?

There is no doubt that our industrial food system is obviously structured around the growing of annual grain crops, especially corn, soybeans, and wheat. However, many people believe that it is entirely possible to shift our current, industrialized system towards a permanent agriculture of nut producing tree crops. Chestnuts, especially, offer similar or better nutritional value, both in carbohydrates and proteins as other grains such as corn and soy grown in rotation.

While the American chestnut was devastated by the Chestnut blight fungus at the beginning of the past century, hybrid Chinese varieties are resistant to this fungus. Similarly, scientists are looking to create American chestnut varieties with genetic resistance to the deadly fungal blight.

From a production standpoint, it is entirely possible to get similar yields per acre of Chestnut carbohydrates to that of corn. While the actual statistics might show corn, soy, and wheat as slightly higher in production, this doesn´t take into consideration the fact that other food products could be grown in companion to the chestnut forests. Pasturing pigs, lambs, and other livestock under the chestnut forest plantations could allow for an extra protein product to be raised with minimal outside inputs.

Other influential authors argue that it is entirely possible to modify existing farm machinery to make chestnut harvest more efficient and streamlined. If the idea of any type of monoculture, even that of tree crops, sets of alarms, chestnuts are also great tree crops that could easily be combined into a polyculture permaculture design. As the cover story or canopy layer, hazelnuts, pruned fruit trees, and other fruit producing bushes and ground covers could easily be designed into a highly productive, perennial, forest-based food ecosystem.

The Challenge to Shift to Tree Crops

There are two main challenges facing the need to shift our agriculture systems to perennial tree crops. First and foremost, there are plenty of deep-seated economic interests behind the current food system. These economic and political interests of the mega-agricultural corporations which are highly profitable, though ecologically destructive, will make any shift in agricultural paradigm difficult.

Secondly, the establishment phase of any tree crop system will take a certain amount of time to become profitable. Most tree crops need at least a 7 to 10-year introduction phase to begin maximum production. This establishment phase might scare away many farmers who economically survive on a harvest to harvest basis. Government subsidies for tree crop agriculture would be one way to make perennial forest agriculture economically viable for a number of farmers. The ecological benefits would be well worth the cost.