Lacey was found in a kill pen, weighed and labeled to ship for slaughter, and saved by a horse rescue.  From what I’ve been told, Lacey had been a show horse, and then a children’s camp or riding school horse.  She apparently had training in several disciplines.  She was registered purebred, with an absolutely gorgeous sire (dad).

When Lacey finished her quarantine (kill pen horses are often carrying a variety of contagious illnesses) she came to Barakah Heritage Farm to be part of our lesson program.  Upon arrival, we discovered she was angry and defensive and wanted no part of being touched or tacked up or ridden. 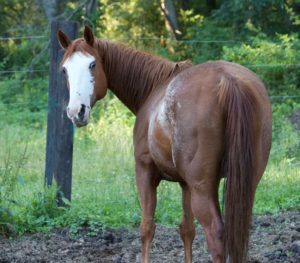 Physically, in spite of the fabulous care at the rescue quarantine, she was a little thin due to some digestion issues.  She likely had the typical buildup of environmental toxins, and most likely also ulcers as a result of stress and diet.

Who she is today…

Full health typically takes 2 years, and she is partway through that process.  She still struggles to maintain weight.

She is much more trusting, and enjoys being brushed and having bodywork.

She is not ready yet for tack or riding.

She is low mare in the pecking order and does not appear to have formed any close bonds in the herd yet.  She is a part of the herd, just not tightly bonded to any single horse. 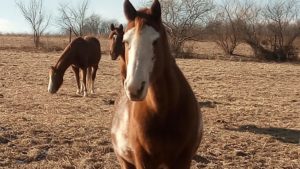