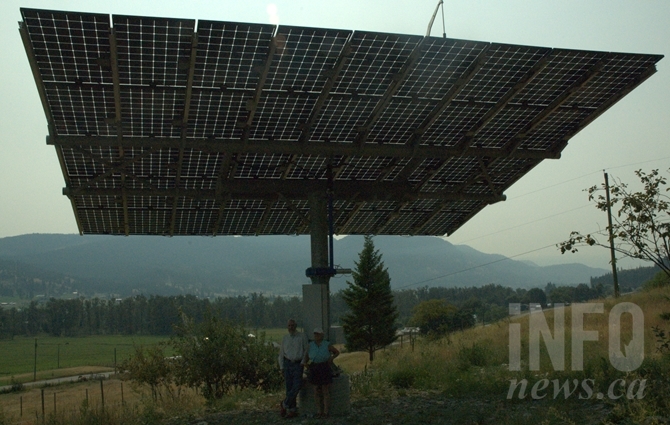 KAMLOOPS – After installing the largest sun tracking solar panel in B.C. on their farm in Black Pines just north of Kamloops, Charles Hays and Penny Powers expect to never pay for power again.

If all goes according to plan, the power company will pay them. 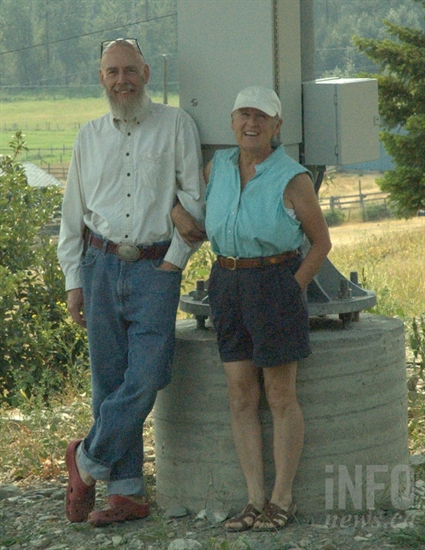 Money isn’t what drove the pair to install the 1,100-square-foot solar array that stands up to 39 feet tall housing 45-watt solar panels at 285 watts each on their property on Westsyde Road. Hays says they kicked around the idea of an alternative source of energy for a while but because their property backs up against a hillside, wind and solar power didn’t seem like viable options.

“When you look at a different way of doing something, like solar panels, usually the first step is to say ‘great idea, except it won’t work for me and here’s why’,” he says. “But the tipping point happens when you see other people doing it.”

“There’s a mobile home on Westsyde Road that has one of those little RV solar panels on top. Maybe they’re charging their phone with it or maybe they’re running their laptop. You see that and you think to yourself ‘they made that work, I wonder what we could do here in our lives to make this work’.”

Hays hopes their project will inspire others to look into using alternative sources of energy, though this scheme might not be for you — it cost roughly $90,000 to install the unit.

“We are trying to reduce our monthly expenses because if you reduce expenses you save more of what’s coming in without your taxes going up so it’s like a big raise,” she says. “If you have the money to put down immediately to get this, you won’t have hydro bills for the next thirty years.”

Admittedly, says Powers, all financial figures are estimates from B.C. Hydro and Sweet Spot Solar, which installed the array. Their solar system is the first of its kind in the province so they’ll have to wait and see what reality holds.

From day to day, they will either create enough power for themselves — or they may not. Because they are still part of the B.C. Hydro grid they won’t be without power. When they make more than they need, the energy will be fed back into the grid and will be used to power other homes. At the end of the year, B.C. Hydro will simply look at how much energy has been put back into the grid and if it is more than what they have used, they will be paid for it.

What makes this solar array so unique is that is does not sit stationary and let the sun pass by like most solar systems. This one has two motors designed to tilt and rotate to face the sun throughout the day.

“It is just a set of linear actuators that move it a little bit at a time so it can face the sun,” says Michael Mehta, president and CEO of the Sweet Spot Solar Company. “In principle, it is very similar to the way a sunflower tracks the sun.”

Mehta is also confident the array will lead to a profit for Hays and Powers at the end of the year. On one sunny day in July, it took just two hours for the unit to produce enough energy to power the average home in Kamloops.

However, while the savings seem great and the technology is fascinating, there are some downsides to the set up at the farm in Black Pines.

The property will not be immune to power outages as they are still running through the B.C. Hydro grid. There is the possibility to set up a series of batteries to store some of the energy, but Powers laments that it would take an entire room in their house just to store that kind of power.

Due to its size, the towering array is susceptible to strong winds which can blow through the Black Pines area at times. However the array has a built-in safety procedure that will send it into “table-top mode” which makes the panel go completely flat in order to avoid damage.

There will be some maintenance involved as well, according to Mehta, who says the mechanical parts used for the tracking function will probably have to be repaired or replaced every 10-15 years. The panels themselves have a minimum lifespan of 25 years.

The big issue they are dealing with now is the impact of smoke on how much sun reaches the unit. Hays says at its worst they have seen a 40 per cent reduction in energy. However, Mehta says the solution to this issue is built into the solar panels as they are bi-facial which means they absorb sunlight from both sides. This ability to pick up the reflection off background material adds up to 20 per cent to the array’s absorption power.

Now, you may be wondering if it would be worth it to you to set up a tracking solar panel on your property. Mehta admits that with this technology is new and might not be worth it for most home owners. Instead, try a few panels at your home for a more affordable option in the future — he says it’s well worth the investment.

“The huge advantage to the people with solar is they can resell their house at a premium,” says Mehta. “They have done studies in the U.S. that find you get 100 per cent of your investment back in solar. Renovating a bathroom or a kitchen may get you 30 per cent or 40 per cent.”

Whether the installation of the massive solar array will be costly, cost neutral, or a money maker for Hays and Powers is still yet to be seen, but they hope to inspire others to find their own ways of saving — or producing — energy. 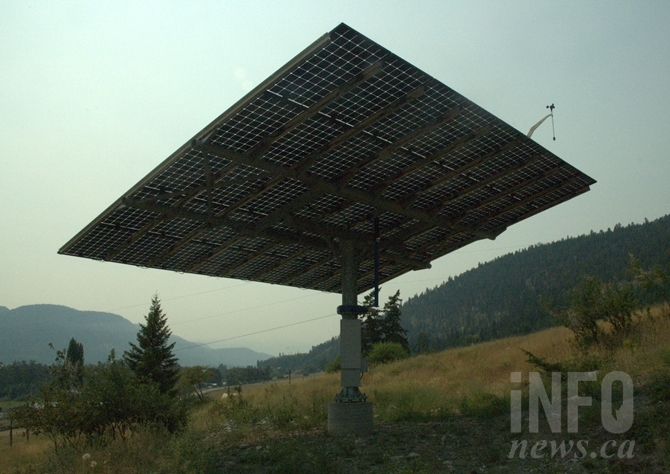 The solar array houses 45 solar panels at 285 watts each. It is anchored down by a 12 ft x 12 ft concrete slab buried beneath the ground.
(MIKE MCDONALD / iNFOnews.ca)

To contact a reporter for this story, email Mike McDonald or call 250-819-3723 or email the editor. You can also submit photos, videos or news tips to the newsroom and be entered to win a monthly prize draw.

We welcome your comments and opinions on our stories but play nice. We won’t censor or delete comments unless they contain off-topic statements or links, unnecessary vulgarity, false facts, spam or obviously fake profiles. If you have any concerns about what you see in comments, email the editor in the link above.