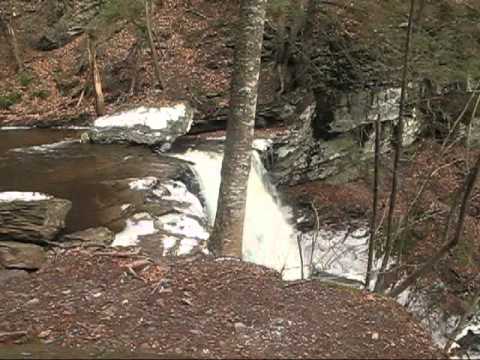 This video presents images captured during a hike along Kitchen Creek in Pennsylvania’s Ricketts Glen State Park. Rickett’s Glen is renowned for its more than twenty waterfalls located along two branches of Kitchen Creek. Kitchen Creek and its waterfalls spill over the escarpment of the Allegheny Front in north central Pennsylvania. At ninety-two feet, the highest falls in Ricketts Glen State Park is Ganoga Falls (not shown in the video). Because of icy conditions, the trail along Kitchen Creek was officiallly closed on December 30th. Disregarding the official notices tacked on a post at the trailhead, myself a few other rule-breakers went ahead and hiked along the safer parts of the trail. The temperature on the day of this hike rose to about 40 deg. Fahrenheit. Evidence of melting (dripping icicles, etc) can be seen throughout the video. Streams carve landscape in a number of ways. One of these is the incision of a stream’s channel into the bedrock over which the surface water flows. Where a stream encounters a hard, resistant rock bed or formation during this process of incision, a waterfall forms.

With respect to the broad expanse of geologic time, waterfalls are relatively short-lived landscape features. The third falls in the video (Sheldon Reynolds) is located in a bowl-like, rock-cliff ‘amphitheater.’ This geomorphological configuration reminded me of the underfit streams and waterfalls of the Columbia Plateau’s Channeled Scablands in eastern Washinton state. Thousands of years ago at the close of the Wisconsin Ice Age, a vast flood swept across eastern Washington, carving its network of channels and coulees. I wonder if anyone has attempted to invesitgate a similar hypothesis with respect to the formation of the waterfalls in Ricketts Glen along the Allegheny Front. The Wisconsin ice sheet margin was in the Ricketts Glen vicinity. If pro-glacial lake deposits have been identified to the north of Ricketts Glen, my hypothesis may have some merit. (Or, perhaps, a catastrophic flood event occurred in the Illinoisan glacial stade earlier during Pleistocene time.) The parent material for the soils in this forested area is glacial till, which can be seen in the video in several of the stream-side soil exposures (for examples views at 1:45 and 1:53). The first falls in the video is Adams Falls (not labeled onscreen).

Edible Perennials: 50 Top perennials from plants for a future